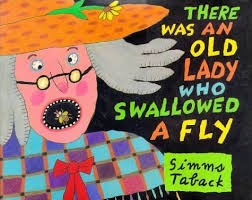 Emotional eating makes me think of the nursery song, “There was an old lady who swallowed a fly”. Just in case you need a refresher:

And on and on it goes. She swallows a cat to get the bird, and even manages to swallow a goat, until we find that she swallows a horse (she’s dead, of course).

Often there’s something in life hurting or bothering us, and when we don’t know what to do with it, we just swallow something else. But of course, it can’t touch the real problem. We keep eating and eating to fix it, rather than addressing the underlying hurts and fears. Short-term, it’s a familiar, non-threatening escape, but it’s much harder in the long run, because nothing is solved.

When we’re little, food may be the only thing we can control, and so at that point in time, the strategy makes sense. We can soothe ourselves and comfort our bodies. And yet as we get older, oftentimes the habit remains. Just like the song, as our life’s challenges get bigger and bigger, often the eating issues do, too, until, well, it seems like it would take a horse to fill the hole in our hearts and to leave everything behind for a while.

It doesn’t seem that this is in any way a problem limited to people with eating disorders. It seems that people (namely women, but men are catching up) have disordered eating behaviors to try to control the chaos in our lives. Sometimes the emotional eating is unmistakable and sometimes it’s more subtle. And yet if we’re paying attention, we know the difference between eating because something is delicious and eating for momentary stress relief.

The trick is in realizing what we’re doing, and finding a new way of self-care. It takes courage, self-compassion and lots of support. Getting help and trying something new is brave work.

But it beats swallowing a goat.
At least, that’s my vote.
(pardon the pun)

This post is brought to you by Cheryl Harris, a Registered Dietitian in Alexandria, VA. She loves writing on matters near and dear to her heart, including a gluten-free diet, health, self-acceptance and of course, food. For more of Cheryl’s musings, see www.harriswholehealth.com, www.gfgoodness.com or follow on Twitter @cherylharrisrd.