Does This Uterus Make Me Look Fat?

How many advertisements and articles have you seen in your lifetime that sell you the idea of getting a “flat belly?” I’ve seen a zillion and I’m sick of it. In fact, I was brewing up a blog post about it and telling one of my clients about it. We were talking about the female anatomy and how as women our middles hold digestive organs (think stomach, liver, and intestines) as well as reproductive organs (think ovaries, Fallopian tubes, and uterus). Plus we need extra padding to protect all of those vital organs! A woman’s belly IS NOT MEANT TO BE FLAT. 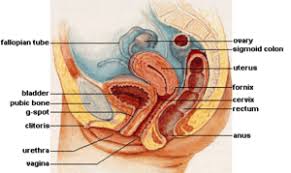 So as I was getting all worked up about this, my client informed me that she already wrote a blog post about this very issue! And it’s even better than what I could have written myself. Gratefully, she has allowed me to share it with you. I am sharing part of it, but if you’d like to read it in its fabulous entirety, check it out here. Plus she has other helpful musings on how to be media savvy in our often toxic culture. Enjoy.

Thanks to photoshop, it’s very easy for women to forget what a “real” woman’s body looks like. My mother used to refer to it as her Kangaroo Pouch. The endless messaging of “targeting those hard to reach lower abdominals” in our core workouts, combined with the airbrushing out of any softness in a woman’s lower belly has completely eradicated an all important fact from our minds – Women. Have. A. Uterus.

What’s cool is that it helps us do all sorts of neat things, like ovulation, so that we can someday make some cute looking babies. Let’s take a look at this before and after photo of Serena Williams shall we? 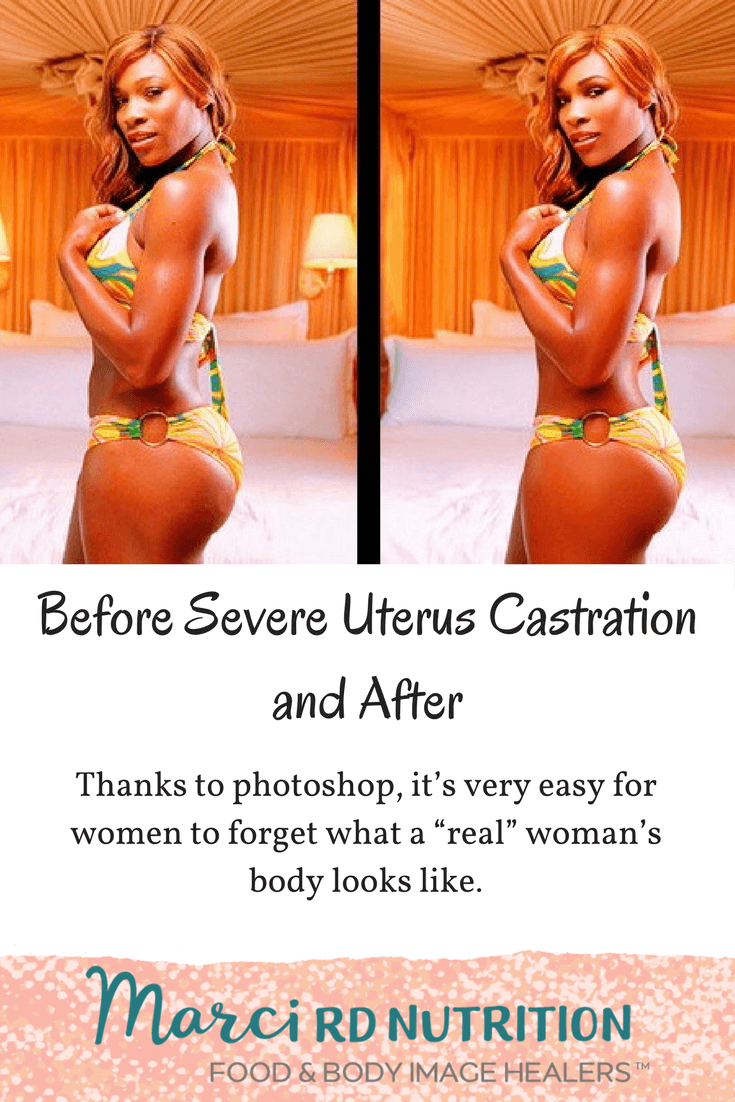 See now I’m almost standing on my computer chair ready to deliver a tyrannical speech on “Saving the Uterus”. Firstly, Serena is an extremely fit and strong woman, with abs that could probably survive one of those Acme weights or pianos falling on top of them. 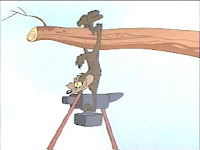 Secondly, and this is key, she is a woman. By smoothing out (and airbrushing in) her stomach area, you are essentially removing that which makes her female, and you are perpetuating a myth that there is such a thing as a concave lower belly that occurs naturally, and not through extreme starvation. In essence, anorexia does the same thing to a woman as the photoshopped picture above – it removes the womanhood from the female, and creates a little girl. It removes any purposefulness, other than to be looked at through (or consumed by) the male gaze.

In the depths of my eating disorder, I lost the ability to menstruate. While of course women would kill to not go through the millions of annoyances of having a monthly cycle, for me it was the ultimate wake up call. I started having dreams of babies – dreams and nightmares. Babies floating on clouds, babies screaming and crying and me running through tangled woods to try and find them, babies who were hungry and I could find no food to soothe them. I recalled watching my mother try to conceive, the failure of her systems to operate properly bringing her miscarriage after miscarriage, watching as my father had to inject her with shots of infertility drugs, watching as she turned into a skeleton of herself as she cried in her room while others became pregnant when she did not. I remembered the joy in her eyes when my sister was finally born.

Suddenly, I wanted to fight for my uterus.

Now, I’m constantly amazed and astounded at my body. When I pay attention, I learn something new from it every day. I notice how my uterus ascends upwards after I ovulate in preparation for a baby (that will definitely not be coming anytime soon, but still!). I notice that this makes my stomach stick out for the two weeks prior to my period. And instead of lamenting my “kangaroo pouch”, I thank it. I send it warm thoughts on how grateful I am that it is working properly. I continue to nourish my body and I recognize that underneath all the photoshopping, all women, everywhere, have a uterus.

Even if you don’t want kids, isn’t that a comforting thought?